Published Article: How Baby Boomer Clients View Themselves and Their Futures 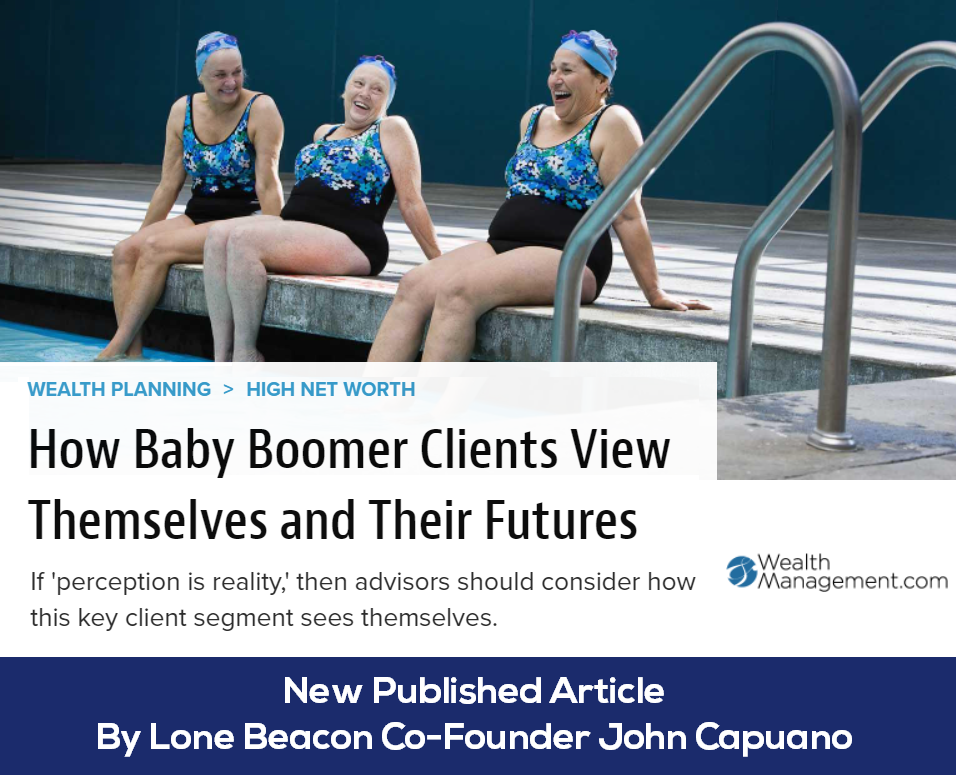 The more we understand the behavior and sentiments of consumers, the more we can connect with them. This is particularly true, but often misunderstood in the financial planning industry. Lone Beacon conducts consumer surveys designed specifically for their clientele, the generation currently in retirement or preparing for it.

In the first quarter of 2022, we surveyed 1,500 respondents from coast to coast between the ages of 50 and 70 who averaged just over $500,000 in net investable assets. This is our fifth year conducting such studies and a constant has been the similarity of responses across markets. This suggests that “people are people” no matter where they’re from. Regional differences seem to matter little when it comes to retirement goals, views on aging, and cultural beliefs. This is true when it comes to general consumerism, as well as the financial world.

This study was focused on two general categories: 1) Lifestyle Self-Perception, and 2) Wealth Transfer. 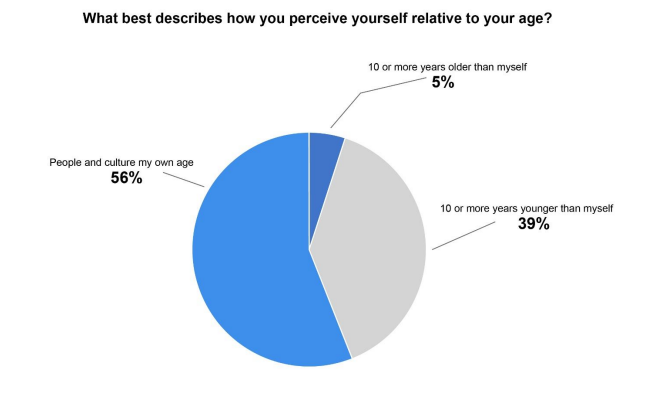 If “perception is reality”, we should consider how this segment of the population views themselves: Only about half of the respondents (56%) best relate to people their own age. When asked which demographic they most identify as, nearly half, (39%) said they identify as someone at least 10 years younger than themselves. Conversely, only five percent of the polltakers identify with people older than their actual age. A common saying a decade ago was “40 is the new 50”, but now it seems to be trending closer to “35 is the new 50”. This trend is not to be confused with the decade in time that they most closely identify with, meaning someone can simultaneously believe they feel like a younger demographic, but can still relate to older cultural norms.

Which of the below activity groups do you most associate yourself with? 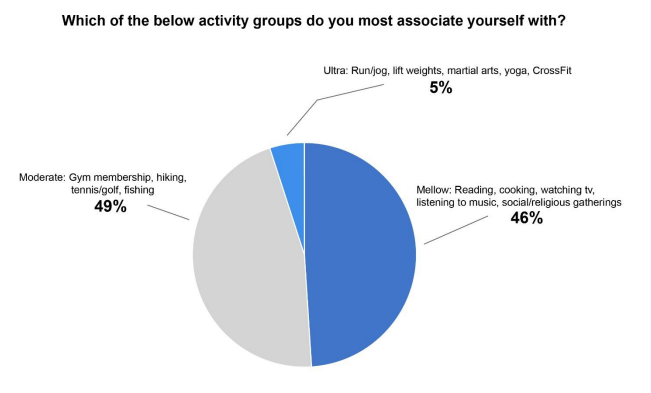 About half of the respondents (49%) say that they participate in moderate to intense physical activities such as running, weightlifting, yoga, tennis golf, etc. The remaining segment was more inclined towards “mellower” activities such as reading, gardening, theater, etc. The notion that the parents of today’s retirees would have been as physically active in retirement seems hard to imagine. Clearly, today’s retiree is very much on-the-go and wired to stay young for as long as he or she can.

When it comes to entertainment and pop culture, the study shows that the music polltakers most identify with is from their young adulthood (20-34) at 54%, followed by their high school years at 31% of the respondents. The trend here is that when it comes to music, the identification with people 10 years younger doesn’t hold.

Along these same lines, our respondents relate to other cultural norms of decades differently: 48% of them relate to the 60’s and 70’s, and the rest are spread out evenly between the 80’s, 90’s, and 2000’s.

This rings true when we consider how legendary artists like The Rolling Stones or Bruce Springsteen seem to be culturally suspended in time. It’s safe to say that their lifestyle resembles that of someone younger than their real age. So, we conclude that while our target consumers might still connect with more traditional cultural norms, they “see themselves” as younger people while doing so. 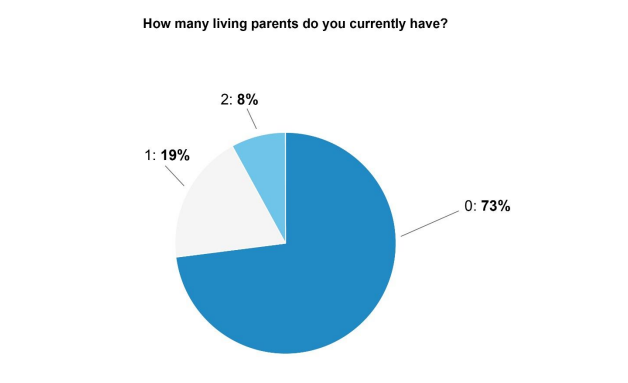 The transfer of wealth is one of the biggest untapped opportunities that exists in the financial world. It’s misunderstood and rarely gets the attention it deserves. Nearly 30% of the respondents still have at least one living parent, and so the possibility of them benefiting from a wealth transfer still exists.

These parents would range in age from late seventies to mid-nineties. A fair portion of this population has assets that will, or should, be transferred to their retiring or retired children. Whether this is in cash, equities, or property, it represents a significant amount of wealth. 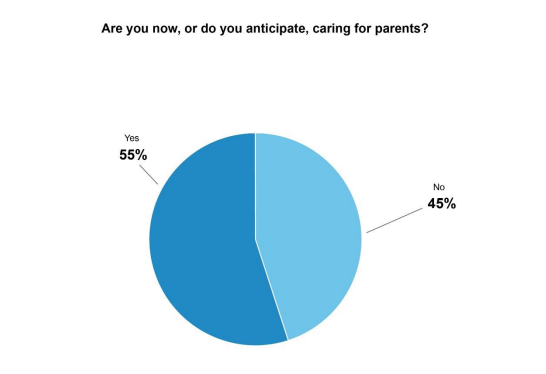 Of the respondents who have living parents, 55% are caring for them in some capacity. For those who are caring for parents, financing the care as well as preserving their estates should be of the utmost importance. Yet, only 53% of the parents have estate plans according to our survey. 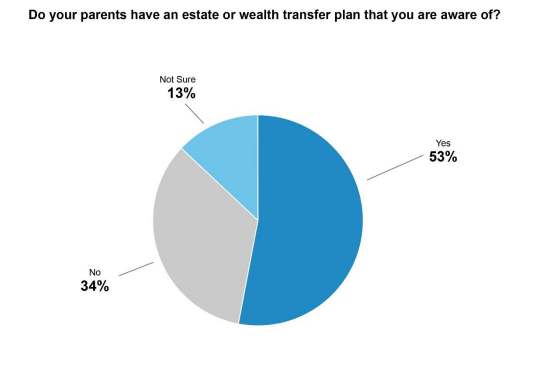 Our survey results say that 60% of respondents have had at least four separate employers throughout their lifetime, and 20% said they have had seven or more employers. We asked this question because we were interested in learning if many respondents have multiple 401(k) plans. 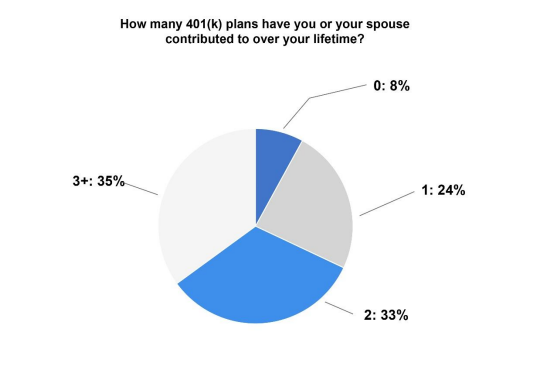 What have we learned?

Billions are spent on marketing in the financial world and all too often firms will make strategic choices on instinct, or worse, via a herd mentality, versus empirical data. We closely monitor the behavior and media consumption of our database of hundreds of thousands of high-net-worth individuals and it gives us great awareness. Surveys like this one allow us to ask deeper, personal questions about things that can help us to better engage with them. This information helps give us a sharper and more competitive edge.