Media Habits and Consumerism for the Baby Boomer

Over the past year, our world and relationship to technology have changed dramatically. Consumer behavior and media consumption has seen radical disruption, and those who recognize and adapt to these changes will benefit. Those who don’t could very easily be left behind.

At Lone Beacon, we collect and use first party data to help us make better and more calculated decisions that literally influence billions in investable assets. Our tracking of high-net-worth investors allows us to deliver meaningful content when, and where they want it.

We wanted to introduce information a year after our country went into social distancing to learn how attitudes might have changed for those near, or in retirement seeking investment advice. The survey consisted of 2,100 participants representing all regions within the continental United States. The participants were between the ages of fifty and seventy-five and had average net investable assets of $500,000.

Since the start of the Pandemic, how have your habits changed on Social Media (Facebook, LinkedIn, Instagram)?
• 80% of the respondents voted that they have spent the same amount or more time with social media over the past year.
• 1 in 5 respondents 20% say they spent less time with the platform.
The facts show that those in the 50+ demographic are clearly spending more time online, while others may have experienced some fatigue based on controversial issues, or simply have spent more time online doing other things.

Since the start of the Pandemic, how have your habits changed watching television?
• 50% have spent the same time with television while 36% have spent more time.
Nearly 90% of the respondents said they spent the same or more time watching tv, which makes sense based on the quarantines. The “original tv generation” has found comfort in the medium that was their “only” option growing up.

Since the start of the Pandemic, how have your habits changed reading the newspaper and printed magazines?
• 60% spend the same amount of time • 25% spend LESS time
There was no shortage of news in the past year, but it didn’t stimulate interest for the most important demographic in “the print world”. In fact, 1 in 4 people said they actually spent less time getting news and information from printed sources. Have they become less interested in news or are they getting it in different forms?

What is your preferred way of staying informed about important financial news?
• Overwhelming, 50%, answered email/blog as number-1
• 18% newspaper or magazines
• 18% of the respondents picked tuning into a live webinar or watching on-demand videos
• 16% answered listening to a radio show was number-1 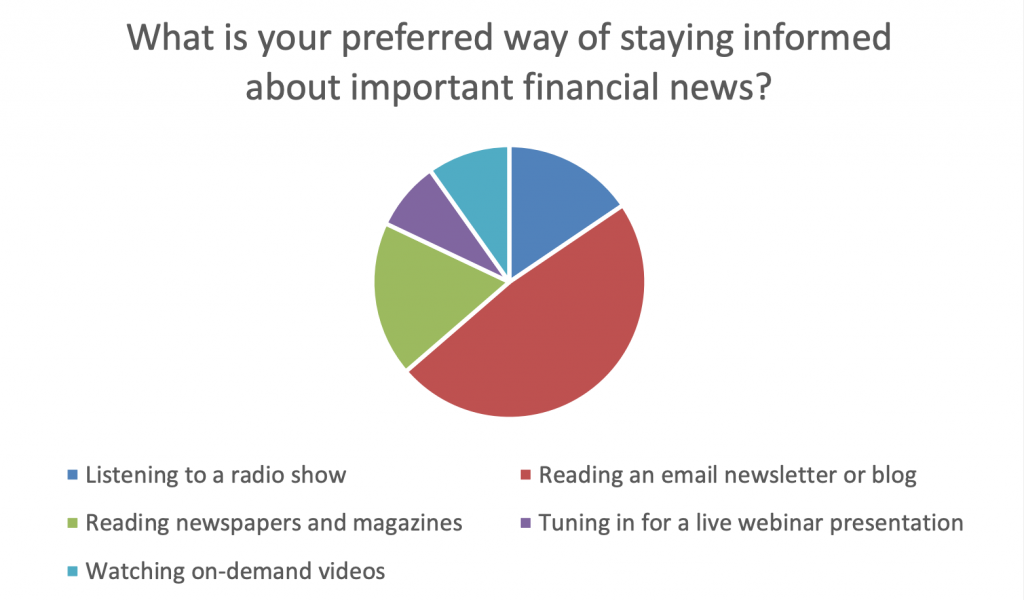 It’s clear that the demographic is relying on outside variables to get their information online based on the number-1 answer and reinforces the importance of content marketing and consistent communication. While nearly 1 in 5 answered print as their number-1 answer it demonstrates a deep decline in the medium from where it was just a few years ago. Conversely, about 20% of the respondents answered webinars or on-demand videos were their first choice for staying informed. Finally, radio was solid at 16%.

How have your computer and online skills changed since the start of the Pandemic?
• One-third of the respondents said that their computer skills have increased over the past year
• 27% had moderate increases
• 6% had significant increases
This isn’t surprising considering people’s increased appetite for online news, especially when such a large number of respondents are spending more time seeking out online information in both written and video form. This also can be a self-fulfilling prophecy in that the industry is producing more digital content directed at them. 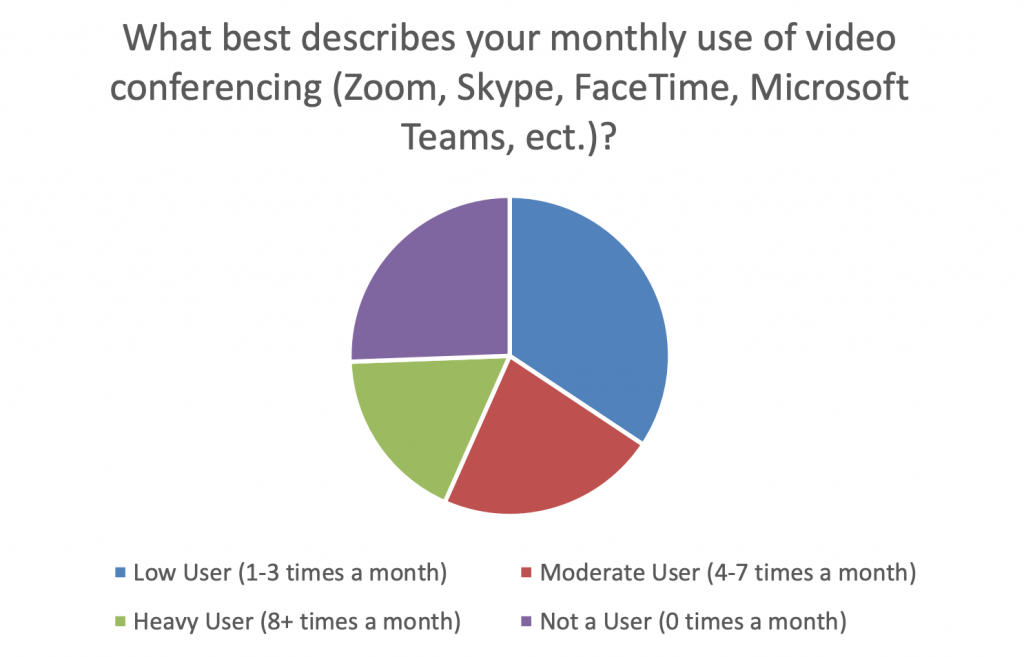 More than three-fourths of the respondents are active in some form of video communication. The fact that many of the respondents are retired, or semi-retired, would suggest that their use is for personal reasons. Even on the low end (1-3x per week) is considerable based on the demographic. They continue to migrate to all-things-digital.

What is your current attitude toward attending a small public gathering (Restaurant, Movies, etc.)?
• 44% would either not attend or attend with extreme caution
• 40% would likely attend with “appropriate” caution
Perhaps nothing had as much impact on financial advisors as the inability to conduct live workshops to attract leads. The declining mail-house return rates over the past 5 years has been a trend that suggests that fewer HNW prospects had a desire to attend a live event. The pandemic has pushed even more of the key demographic to virtual options.

What would best describe your attitudes on State and Federal Income Taxes over the next 10-years?
• 93% of the people believe there will be a significant tax increase
• 68% think they’ll increase by at least 20%
• 28% think they’ll increase MORE THAN 20%
It’s clear that the respondents understand that the bill for the stimulus packages is coming. The overwhelming majority of the respondents appear to be looking for an answer to protect themselves from being “over-taxed”.

Which of the factors below do you believe will have the largest impact on your retirement savings in the next 10 years?
• 32% said the number-1 answer was tax increases
• The number-2 most popular answer is rising healthcare costs
• Inflation and market declines rank next with about 20% each
• About 7% thought social security would be a concern 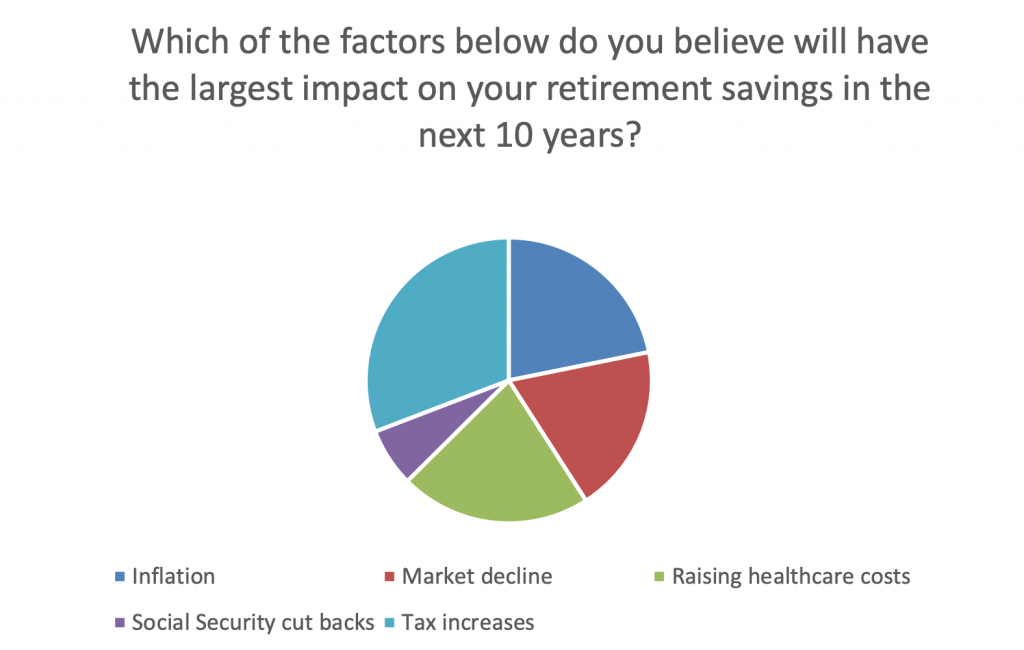 Not surprisingly, taxes were of the greatest concern. However, the threat of rising healthcare-costs was the second most popular answer (above market declines and inflation). Yet, only 7% of the respondents said they were concerned about Social Security, despite it being a common marketing theme among local advisory firms.

Conclusion
In regard to media, there is little doubt that our respondents are migrating to embrace digital more aggressively. While the 50+ demographic has been the fastest growing online group in many categories, the pandemic appears to have accelerated their use of technology. Whether it be the use of webinars/videos or increased online content the survey suggests that they are becoming more literate with digital platforms.

That said, the digital migration has accelerated, but as marketers we should be helping them consume and engage this way. The more we can do to offer good content, and make it easy and accessible to engage with, the larger our marketing advantage will be. To that end, we encourage you to not only offer good financial content, but helpful technical education to help them become more digitally savvy.

In regard to content that the respondents weighed in on, TAXES were of the greatest concern. This supports more tax-efficient planning messaging. Rising healthcare costs were a major concern, and it’s often under-addressed from a marketing standpoint. This should not be surprising based on the aging demographic, and the fact that the pandemic made us all think more about our own health vulnerabilities.

While Social Security is so present in the marketing of many local independent financial advisories, it barely scored among the respondents. It’s clear that among them, it is not a pressing concern. That said, we anticipate that it will continue to be a topic that resonates, but that people believe it is less perilous.

In the end, we believe that following empirical data is vital when competing for tomorrow’s business. Too often, those in the financial industry are “herd creatures” and are slow to change course. This information will help us, and you, reach investors how, where, and when they are most likely to engage.